Talking to media on Thursday, he said “it is our job to check and stop the inflow of any infection from abroad.”

The minister assured that monitoring facilities will be provided at airports, seaports and other points of entry.

The intending Hajj pilgrims will also be screened and scanned for polio and meningitis before their departure from Pakistan, he added.

Kiani said that screening facilities at borders of Afghanistan and China are being upgraded.

A day earlier, it was reported by sources that the chances of transmission of life threatening Ebola virus from South Africa to Pakistan, have greatly increased.

The virus is regarded as a symbol of terror worldwide, is now likely to make its way towards Pakistan as the thermal scanners, fixed to detect Ebola virus, are out of order at the International Islamabad airport. The staff of health department also remains absent at the airport, as per sources.

About 90 per cent of Ebola-affected patients lose the battle of life.

It is mandatory for passengers coming from Africa to be screened through thermo-scanner. On the directions of World Health Organization (WHO) in 2014, a scanner was installed at the Islamabad airport, however, the administration started to overlook the matter and kept sending a positive report to the WHO. 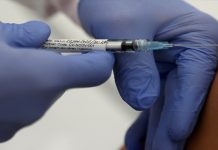 Can people receiving Covid-19 vaccine die in next two years?

Get vaccinated, win cash as US state offers $116.5 million in prizes