NEW YORK: Foreign Minister Shah Mehmood Qureshi said on Thursday that 14 out of 15 members have agreed to adopt a joint strategy on the Palestine issue ahead of the United Nations General Assembly (UNGA), ARY News reported.

Shah Mehmood Qureshi, while talking to ARY News, expressed sorrow over the deteriorated situation in the Occupied Palestinian Territory. He said that 125 missiles were dropped in Gaza within 25 minutes, whereas, the Palestinian foreign minister has also apprised the situation of the territory in his conversation.

He added that the world could estimate the ongoing atrocities in Palestine. Qureshi said that he will deliver his speech at 8:00 pm (Pakistan time) to give Islamabad’s stance on the Palestine issue.

Nearly 95 countries and organisations will express their thoughts in the upcoming session of the United Nations General Assembly (UNGA). He added that it is his responsibility to exhibit facts before the UNGA regarding Palestine.

The foreign minister said that all countries including the Organization of Islamic Cooperation (OIC) member states are activated. He questioned the world for not paying attention to the genocide of Palestinians by Israeli occupation forces.

FM Qureshi said that the government has successfully gathered Muslim states in accordance with the vision of Prime Minister Imran Khan. A sitting was held yesterday where 14 out of 15 members have agreed to adopt a joint strategy for the Palestine issue. The foreign minister said that one member is left to be convinced for adopting a joint strategy.

Earlier, while condemning the worst brutalities against innocent Palestinians by the Israeli forces, Foreign Minister Shah Mehmood Qureshi had said that ceasefire in the area was his top priority.

Talking exclusively to the ARY News program “The Reporters”, FM Qureshi had said that Israeli forces were committing grave human rights violations in Palestine. He said that they were targeting hospitals and unarmed people in the area.

The foreign minister had said that they will draw the attention of UN secretary-general towards the grave situation in Palestine and will present their point of view over the matter during the emergency session of the United Nations General Assembly scheduled to be held on May 20. 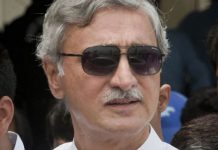